Part One of our continuing saga of re-tiling our master bath shower, part of an overall master bathroom remodel…

We’ve done enough DIY remodeling work over the years to know what we’re capable of taking on…and what we aren’t (or maybe “shouldn’t”).  We probably could have remodeled our 23-year old master bath shower ourselves, but we needed it done now, and we needed it done right. 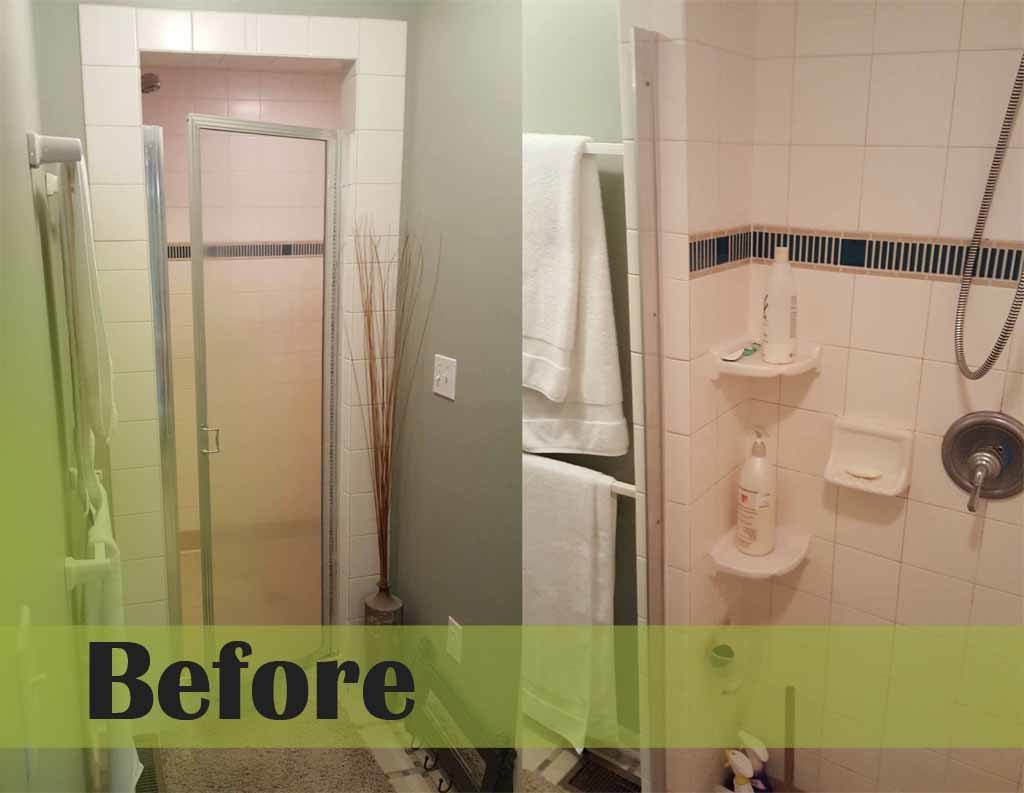 A little background – we bought our little 1971 California Contemporary home in 1991, and promptly set about remodeling and adding on.  The addition we did in ’93 included a “real” master bath, which means this year, it turned 23.

And started leaking through the basement ceiling.

We held it together with silicone caulk for a year, but tile was coming loose, the plumbing was ancient, and frankly, that 23-year old cheap 4 x 4 white tile was ready for an upgrade, don’t you think?  And the 2 x 2 beige (blech!) tile on our tub deck, well, that had to go, too.

It’s a pretty big shower – 42″ wide and 84″ deep, with two showerheads and a big bench seat, so we knew we were getting into a serious expense. Through my contacts in the home remodeling business, we hired George Everett for the project.  George’s initial estimate, not including tile, plumbing fixtures, or a shower door but including a linear shower drain, was $7,133.

Turns out the linear shower drain, while a cool detail, is also pricey – without it, the number came down to $5,883, more in line with our expectations.

George estimated we’d need 275 square feet of wall, deck, and ceiling tile; 90 linear feet of bullnose tile; 28 sf of mosiac tile for the floor, and three 25# bags of grout.  He’d supply everything else for the tile work. 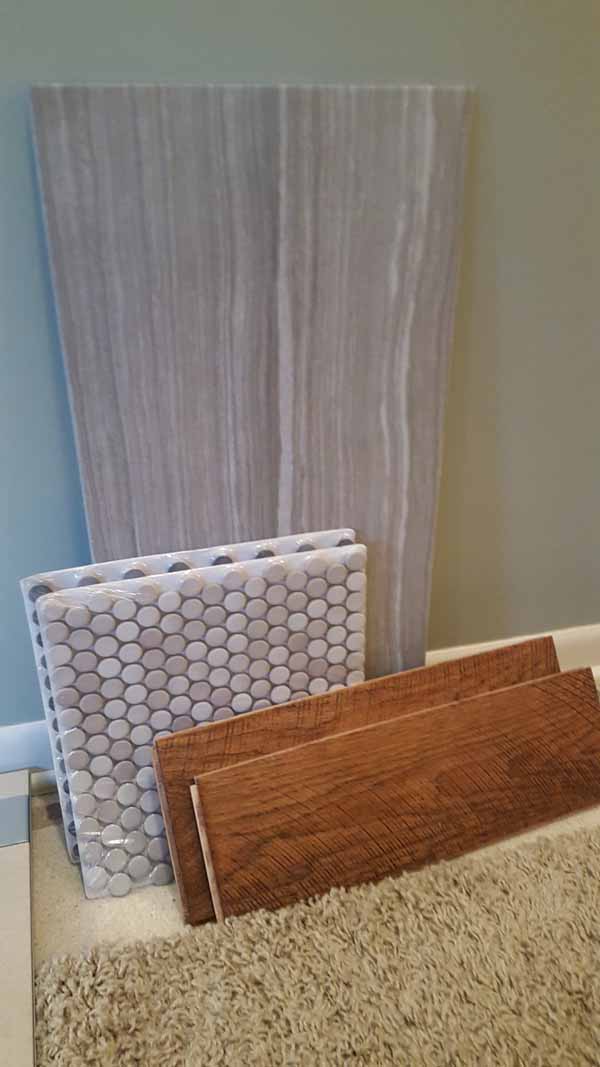 Our first pass at finishes.  We’re definitely using the large 12 x 24 tile for the shower walls and ceiling, and the tub deck.

After shopping a few of the local tile shops, we ended up buying at Floor & Decor, a national discount chain with stores nationwide. At Floor & Decor, you buy and walkout with your tile the same day. At other specialty tile store, it could be several weeks before your order is delivered.

Timing was important, but so was price.  We paid about $2/psf for tile; similar tile at other places was at least twice as much.

The mosaic floor tile – our original choice was this “penny” tile, but after we got the sample home we decided the look wasn’t right.

Instead, we ended up with XX, a larger mosaic tile that turned out perfectly!  Total cost of all the tile and grout came to $1,563.83.

The engineered wood flooring in the photo will eventually replace the old sheet vinyl floor – more on that in a later post. 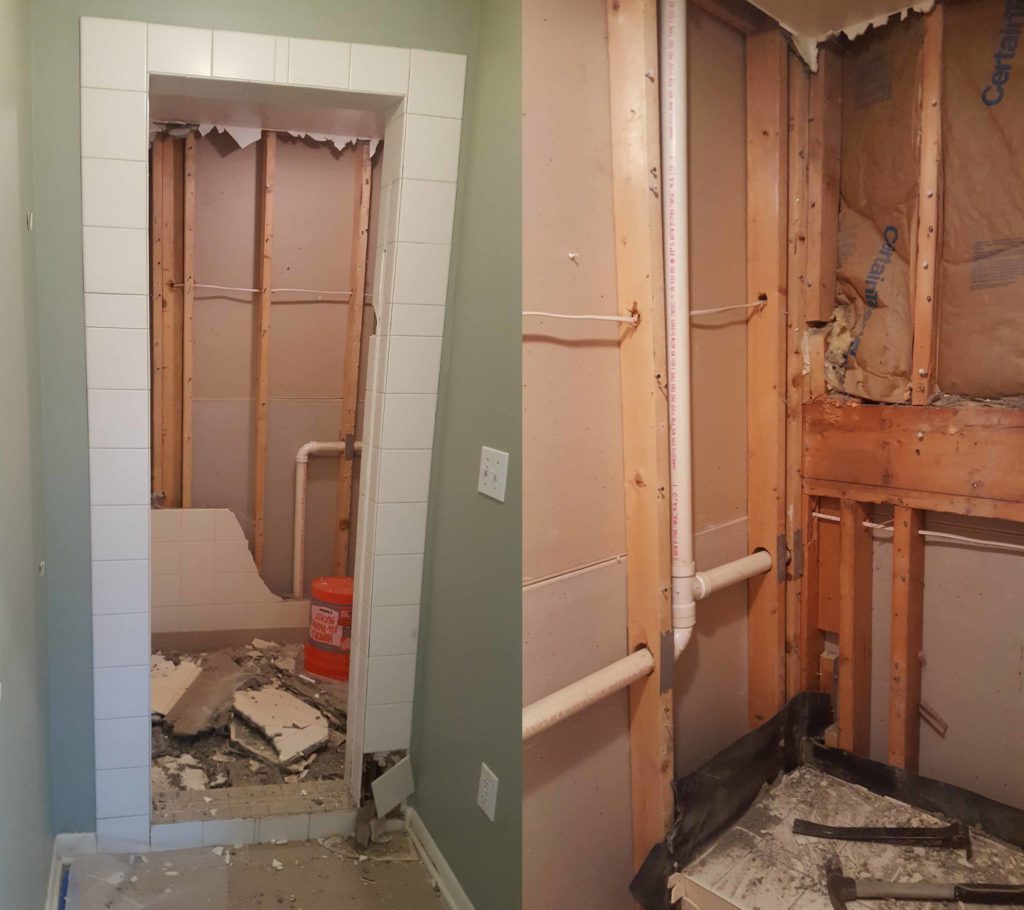 George estimated three weeks start to finish, and Day One was Demo Day!  Here’s another reason we decided against taking on this job ourselves – the old tile, backer board, and shower base filled the back of a pickup truck (we don’t have a pickup truck). Dust – yes, but George did a good job protecting the carpeting and keeping things relatively clean. And of course, we’re now showering in the hall bath. 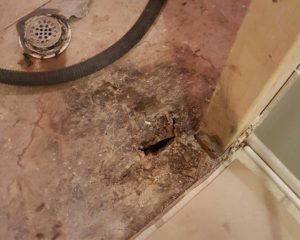 Day Two – and the reason for the leak in the ceiling below! The shower base was leaking a LOT, apparently!  More than a tube of caulk could handle!

The OSB floor decking was completely rotted away, and was starting to show signs of mold. Yuk!  The damaged wood was cut out and replaced with new. 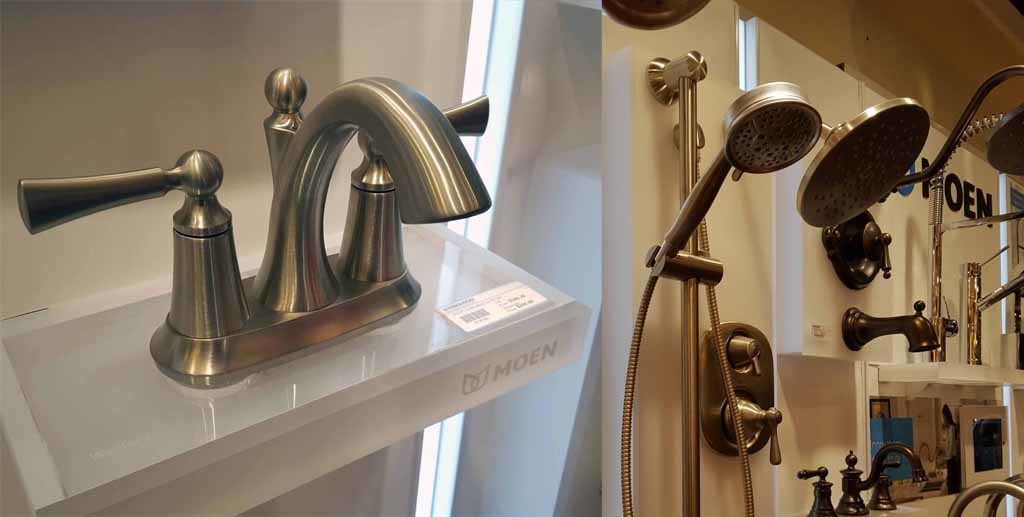 With demo underway, and the plumber scheduled to install the shower valves in a week, it was time to buy fixtures. We did our shopping at the Ferguson showroom, and chose Moen Wynford shower wands, and a Wynford tub filler. Both have a polished nickel finish.

George’s plumber needed the shower valves first, but fortunately Karen was able to pick up the fixtures and valves at the same time, and save another trip across town! Total for the tub filler, shower wands, and shower valves (with my trade discount) was $1,821.62.

Week two begins and the tile and grout are stacked up in our bedroom, and all the plumbing fixtures, valves, etc. are delivered and ready to install. There’s still dust everywhere, we’re still showering in the hall bath, but demolition is done and we’re ready for actual construction.

Next: Building and Finishing the Shower